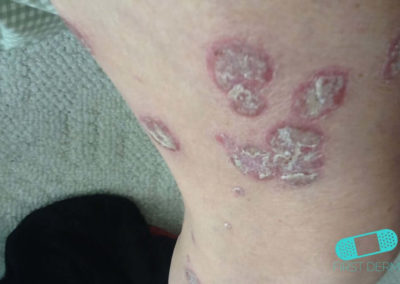 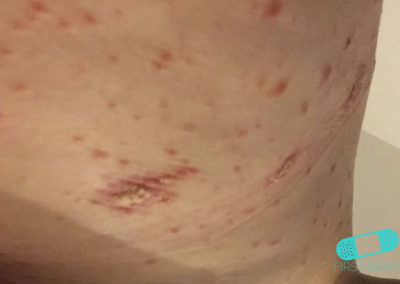 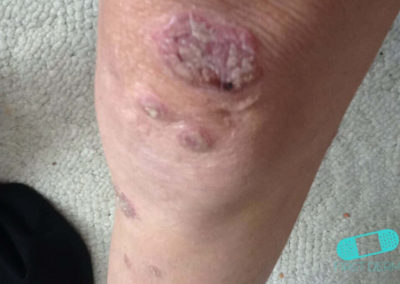 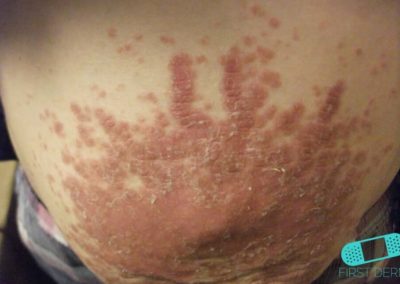 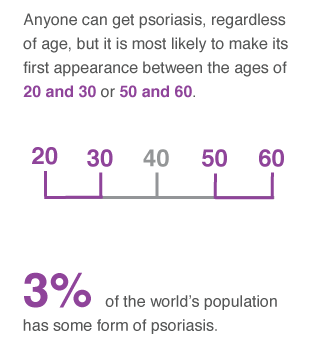 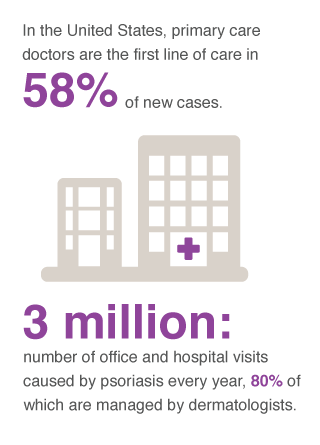 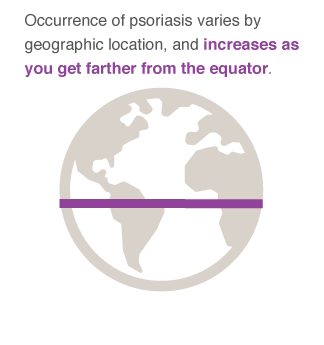 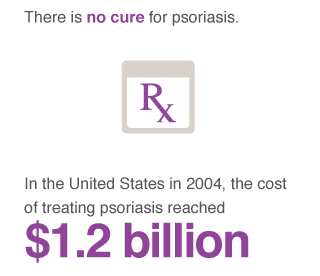 Psoriasis is a skin disease that presents as red, flakey, and sometimes itchy blotches. Common signs of psoriasis are red, scaly patches on distinct parts of the body such as the elbows and knees. Skin folds such as groin, armpits, nails and the scalp may be affected as well.

Approximately two to three percent of the population has psoriasis, and it is equally common among men as in women. A number of genes have been identified that are linked to psoriasis. Even though the disease may have a hereditary component, a trigger is required for its onset, such as an infection, drugs or mental stress.

The rash is caused by an inflammation of the upper layers of the skin, which also cause the skin to become scaly. For most affected people, the symptoms are mild, but for some they may become so severe that their social wellbeing is affected. Some people with psoriasis may have pain in the joints, known as psoriatic arthritis.

Psoriasis may go into relapse, which means there may be little or no symptoms, which can be followed by a period where the rash gets worse. The risk of developing the rash is increased if someone else in the family has psoriasis.

Plaque psoriasis
The most common form of psoriasis appears as round and scaly rash, called plaque. The size is usually a few centimeters. Plaque psoriasis can appear anywhere on the body, but most often on elbows, knees, lower back and scalp. Plaque psoriasis is usually symmetrical on both sides of the body (e.g. in the same place on both right and left elbow). New rash may itch a lot and often turns into scars or wounds.

Nail psoriasis
Typical of nail psoriasis is to get round pits in the nails above pages and the outermost part of the nails sometimes come loose.

If symptoms are mild then simple emollients and avoiding soap may help. Ointment or cream containing salicylic acid for example, or urea can also help to reduce scaling. If you have moderate to severe symptoms, regular treatment may be needed, such as prescription creams or light therapy. Even though psoriasis is not curable, the treatments available are often able to reduce symptoms. A general practitioner should be able to compose a treatment regime, if not, then a dermatologist should be contacted. Treatments include topical tar based lotions, (Exorex 1% lotion), vitamin D creams (Dovonex), steroid creams (Betnovate, Elocon, Eumovate), steroid and vitamin-D combinations (Dovobet gel), UV light therapy and tablets which can be prescribed by a dermatologist.

Bathing
The simplest treatment is to take a sauna or a bath for 20 to 30 minutes. You can do this when you feel the need for it. Loosen flakes of the active outer layer of the skin, which thins out in the case of psoriasis, and inflammation of the skin will then slow down. The bath also allow the skin to lubricate more easily and more receptive to the light treatment.

Moisturizing cream
For mild psoriasis, you can remove the scaly skin debris by rubbing with a thick layer of moisturizing cream or ointment regularly several times a week. You can use the cream and ointment that contains salicylic acid or urea.

Prescription creams and ointments
If you have psoriasis over large parts of the body or if the rash is visible and unsightly, you can typically use creams and ointments that contain cortisone or vitamin D-like substances. Creams or ointments with strong cortisone acts quickly and does not stain on the skin. But after treatment, the rashes might appear after just a few weeks. The skin can become thin if you are using strong cortisone creams for several years, while weak cortisone creams usually make no difference in psoriasis. Vitamin D-like substances does not act as fast as cortisone, but they do not very many side effects or make the skin thinner when used for a long time. Its effect lasts as long as cortisone as well.

It is common to use either cortisone or a combination of vitamin D and cortisone-like substances in the same tube. For the scalp, you could use a keratolytic dandruff shampoo or a solution containing cortisone, with or without vitamin D-like substances.

Light therapy
Light therapy that suppresses the inflammation complements bathing, creams and ointments. The treatment is done in the light cabinet with ultraviolet (UV) light in a series of 25 sessions, preferably three to four times a week. The treatment starts with about 20 to 30 seconds per session and at the end of the series about four minutes per sessions. You should peel the skin with bath or lubrication before the light treatment to make it more effective. Light in combination with prescription creams or ointments accelerates healing.

With long treatment times, UV light can increase the risk of skin cancer. Therefore, you should get no more than two treatment series per year and not more than 20-30 series in total. You should also be especially cautious when applying light treatment to children.

Light therapy is not appropriate for a rare form of psoriasis called photosensitive psoriasis. This means that the disease accelerates with sunlight or light treatment.

Drugs in the form of tablets, capsules or injections
If you have not gotten better with exterior treatments, you can try taking tablets, capsules or injections. The treatment is often simpler and more effective, but the risk of side effects are usually higher. You may need to have regular checks for your liver function during treatment. Common active ingredients include methotrexate, acitretin, ciclosporin and apremilast.

You should take drugs in low doses – a typical dose is two to six tablets a week or injections once a week. Through regular blood tests, any effects on the liver detected at an early stage are often harmless, and in that case, the dosage changes would be recommended.

Methotrexate has been used to treat psoriasis for many years and is the most common drug, which suppresses inflammation. It is available as tablets, such Metotab, and syringes, such Metoject. Methotrexate can also harm a fetus. Therefore, you should use reliable methods of contraception during treatment and for at least six months after treatment ended. This applies to both women and men. Breast-feeding should be avoided during treatment.

Acitretin attenuates primarily cell growth but also ensures that the cells in the epidermis can grow clear, which reduces flaking. Acitretin is available as capsules in the medicine Neotigason. Acitretin is more effective when combined with prescription creams or ointments and phototherapy treatment. The level of blood fats can increase, so it should be checked during treatment. Acitretin can harm a fetus. Therefore, you should use reliable methods of contraception during treatment and for at least two years after stopping treatment.

Cyclosporine suppresses the immune system, which could attack the body. The drug is usually used for a short time when the psoriasis suddenly deteriorates sharply. You take it for periods of three to six months. Cyclosporine is available as capsules, such as Neoral. It is rarely used for longer as it may have very strong side effects, including high blood pressure and damage to kidney. To avoid these side effects, you should check your blood pressure and kidney function regularly. You should avoid cyclosporine if you are pregnant, unless it is necessary to get the immunosuppressive treatment. You should always consult with your doctor before a planned pregnancy while using the drug.

Apremilast an active substance in Otezla, which helps to reduce inflammation and is a newer oral treatment for psoriasis. You should not use apremilast if you are pregnant or breastfeeding.

X-ray
If you have psoriasis on the scalp or small areas of skin, such as ears or genitals, you can get soft X-ray on the outermost layer of the skin. You can get treatment at a dermatology clinic once a week for a period of six weeks.

Rehabilitation in warm climate regions
Ordinary sunlight has, especially in combination with bathing in salt water, a healing effect on psoriasis. It reduces inflammation and overly rapid growth of cells in the skin. Staying about three weeks in a warm and sunny climate could give the skin a natural phototherapy.

National Institute of Arthritis and Musculoskeletal and Skin Diseases. Psoriasis. Available at: https://www.niams.nih.gov/health_info/psoriasis/