Who is at Risk of Skin Cancer?

Today we’re exploring who is most at risk of skin cancer. Awareness for this deadly form of cancer is improving, however, sometimes it can be confusing. Mixed messages on who skin cancer can affect are detrimental to progress and could put you at risk. We’re here to help…

Who is at Risk? Everyone…

Frankly, everyone is at risk of skin cancer but it does affect some skin types more than others. However, the whiter or paler the skin, the more common skin cancer is.

The sun is a major risk factor, so if you indulge in outdoor activity you will be subject to more sun exposure and increase the risk of getting skin cancer. A sun burn, harms your skin cells DNA and repetitive skin cell damage increases the risk of developing skin cancer.

Despite higher risks for different skin colors, no one is exempt from this disease and we have some great examples to demonstrate that…

Hugh Jackman announced that he removed his sixth sign of basal cell carcinoma. Basal cell carcinoma is a form of skin cancer that develops on the surface of the skin after consistent, prolonged, and unprotected sun exposure. Hugh Jackman has been vocal about his experience with skin cancer, and posted a picture during his recovery with the caption.

“Another basal cell carcinoma. Thanks to frequent body checks and amazing doctors, all is well. Looks worse with the dressing on than off. I swear! #wearsunscreen.”

An example of what happens when you don’t wear sunscreen. Basal Cell. The mildest form of cancer but serious, nonetheless. PLEASE USE SUNSCREEN and get regular check-ups.

Jackman made a great point on how little he thought of sunburns and sun safety in the past. He now gets regular check ups.

“I’m realistic about the future and it’s more than likely that I’ll have at least one more but probably many more, which is not uncommon for an Aussie particularly from English stock growing up in Australia where I don’t remember ever being told to put sunscreen on.”

Fortunately, Hugh has managed to spot the signs of skin cancer early and get treatment. In each case he has had the potential tumour removed to prevent further spreading. 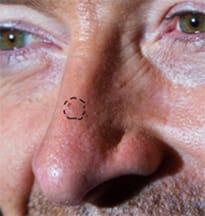 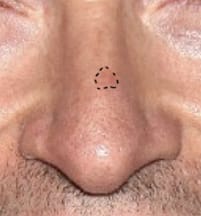 The King Of Norway

You may or may not know much about him. However, the Norwegian King is famous for his love of outdoor activities, skiing and sailing in particular. His sailing skills have won him a place in international competition, representing Norway. From World Championships to European Championships and the Olympics he has won various medals for his sailing. His great exploits are very impressive but all these years in sailing have certainly exposed the King of Norway to the sun.

After a famous speech on diversity back in 2016, many began to question a mole on his right cheek. Although we know the King of Norway is likely to have some of the best medical care in the world, we took it upon ourselves to examine the changes in this mole.

We had one of the First Derm dermatologists check it out…

“Hopefully this is just a solar lentigo, a benign spot caused by the sun, but a precancerous lesion called lentigo maligna can’t be ruled out without examining it closer with a dermatoscope.” John Paoli, MD, Assoc. Prof – Specialist in Dermatology and Venereology

Cancer in Skin of Color 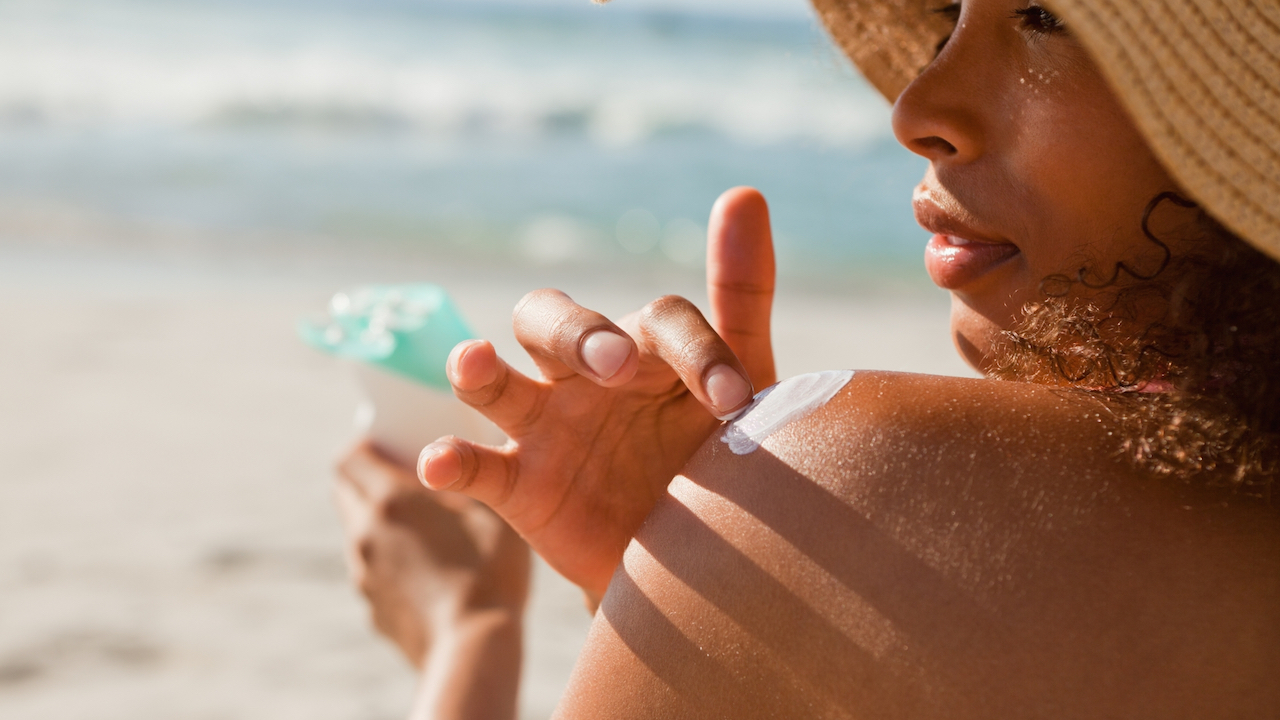 We’ve established now that skin cancer can affect any of us. It doesn’t matter if you’re celebrity or even a royal family member with access to fantastic medical care. Without protecting the skin, we’re all at risk.

It is commonly misunderstood that skin cancer only really affects those who burn easily, typically people with ‘pale’ or ‘whiter’ skin. However, this is untrue.

All people with skin of colour, including those of Asian, Mediterranean, Latin, African, Middle Eastern and mixed heritage, are at risk of developing skin cancers. In fact, skin cancers often present in advanced stages in these ethnic groups, and are more likely to be fatal. Lack of vigilance and awareness probably plays a role in the delay of the diagnosis. Furthermore, the morphology and the presentation of these skin cancers can be quite different for people with skin of colour.

What are the most common forms of skin cancer for people of color?

1. Pigmented Basal Cell Carcinoma – While basal cell carcinoma (BCC) is the most common type of skin cancer in all skin types, in people with coloured skin, the more common presentation is the “pigmented” variant (seen in upto 50% cases). This can present as a slow-growing bump on the skin with a pearly black appearance. BCCs are most common in the head and neck region, often in the elderly, and rare in covered areas.

2. Squamous Cell Carcinomas – These are the most common type of skin cancer in people of African descent. Squamous Cell carcinomas are more often found on the legs, however, may occur anywhere on the body. Any non-healing ulcer or sore should raise a suspicion for this kind of cancer, and must be investigated further. They also have a propensity for developing over old scars from burns and mechanical trauma.

3. Acral Lentiginous Melanoma – This is a variant of melanoma more common in people with skin of colour. Melanomas often occur on the palms, soles, in the mouth, and under the nails in people with coloured skin. It presents as a patch of darkened skin, or a dark vertical band in your nail, which rapidly grows or changes in size and appearance. It is imperative to be vigilant for such changes, and keep a watch on these areas which may be difficult to access. If you are unsure, always seek help from a qualified dermatologist.

4. Kaposi’s Sarcoma – This is a type of skin cancer that is endemic in Africa. Black ethnicities have a much higher incidence of this type of skin cancer as compared to Asians and Caucasians. It presents as painless, violaceous bumbs and patches, which may be difficult to detect in darker skin types. The cancerous spots commonly occur on the lower legs.

5. Dermatofibrosarcoma Protruberans – This is a type of skin cancer that is rare in Caucasians but more common in people of African descent. They present as violaceous/brown/tan thick indurated plaques, which may grow in size. They can occur anywhere on the body.

Although in general, skin cancer is less common in people with skin of colour than in Caucasians, the risk of cancer is definitely there, and the presentations may be more complex and varied. People with coloured skin need to take all the same precautions such as avoiding prolonged sun exposure, regular sunscreen usage,  performing regular self-checks of the skin, and seeking help whenever suspicious bumps or growths are noticed.

A recent press release by the American Academy of Dermatology stated that many latinos do not believe they are at risk of skin cancer.

“The belief that Hispanic people don’t have to worry about skin cancer has existed among Latinos for generations,” she says. “They hear it from their parents and grandparents, and then they pass this belief on to their children.”

However, Dr. Perez adds that the Hispanic population’s access to dermatologic care is also an important factor. Many Latino families are uninsured or underinsured, she says, so they may be less likely to see a dermatologist for a skin cancer evaluation.

In another article featured in The Skin Cancer Foundation Journal, Dr. Perez shared the below chart comparing Hispanic deaths from melanoma to that of Caucasians. 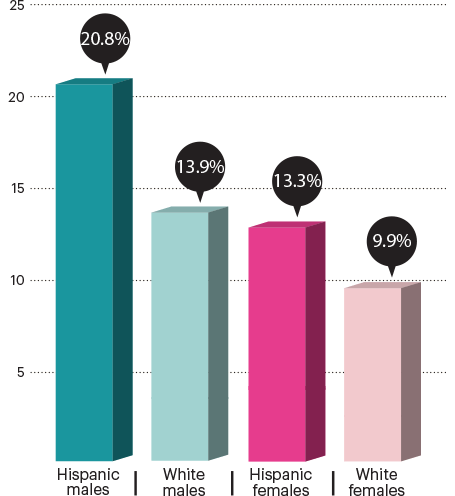 According to a report by the American Cancer Society, there’s a huge survival disparity in melanoma. Among men, about 87% of non-Hispanic whites survive five years after diagnosis, compared to only 77% of Hispanics. Why? Hispanics often discover having skin cancer at the later stage. And early detection is key in curing melanoma.

While the risk of getting melanoma is lower for Hispanics (0.5%) than whites (2.5%), they are still at risk.

Fact: 40-50% of Americans (regardless of ethnicity) who live to the age of 65 will have skin cancer at least once.

Go for a Check-up

If you see any abnormal growth on skin or mole, then its worth speaking to your GP or better yet a dermatologist as soon as possible. Fortunately we’re here to help. You can consult one of our online dermatologists for immediate relief.

How Staying Indoors Affects Our Skin

How AI Could Aid The Coronavirus Crisis 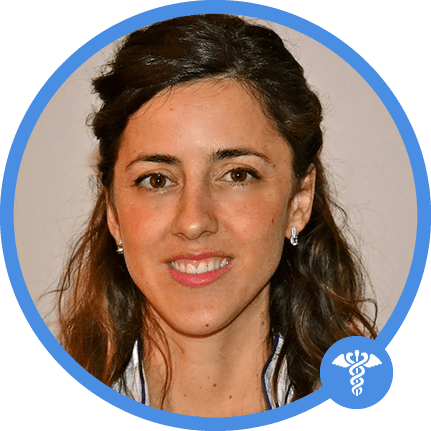