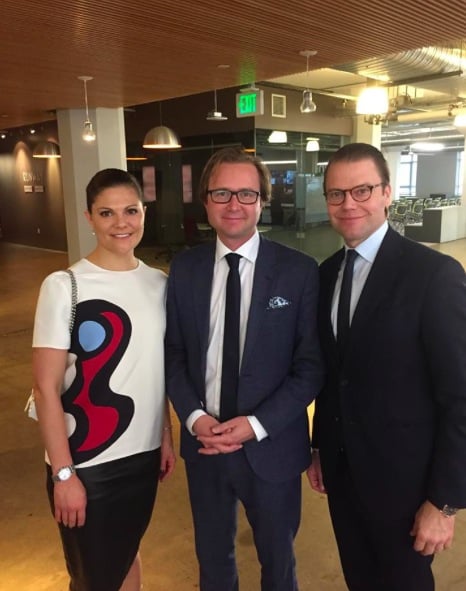 The Swedish royal family, including Crown Princess Victoria, Prince Daniel Duke of Västergötland and their 3 year old daughter paid a visit to the San Francisco bay area this week to meet tech entrepreneurs with a Swedish connection. The agenda for their trip included tours of bay area companies big and small: Tesla, Stripe, as well as startups like iDoc24.

A mobile dermatology company, iDoc24’s flagship dermatology app, First Derm, has already been downloaded over 100,000 times. After visiting the Swedish Church in San Francisco they stopped at Runway (where First Derm is HQ’ed) inside the Twitter building. They took a tour of the space before stopping by the First Derm desks and talking to me.

As the CEO of a small mobile health company founded in Stockholm, it was a great honor to meet the royal couple and talk about my experience of moving a Swedish startup to the Bay Area. We also got to talk about our dermatology service, First Derm, and discuss the benefits of mobile health technology. I let the couple know that the average child has 20 skin rashes before age 5. A mother of a young child herself, Princess Victoria immediately could relate to the usefulness of First Derm for helping young parents identify day-to-day skin problems common among children. Prince Daniel is himself a successful entrepreneur who I admire.

He personally has owned 3 gyms and other fitness ventures in Stockholm. He was very interested to learn of our move to San Francisco and the transition from a small to a large market. Later on in the evening, the couple joined a group of Scandinavian business people in Mountain View for a meet and greet. This week I met both the Swedish royal family and the Swedish ambassador to the US, Björn Lyrvall— I am appreciative for all the help and support from these prominent Swedes, no matter where we are in the globe.

Equally as supportive have been the American diplomats & politicians I have met during my time in America: the US ambassador to Sweden, Mark Brzezinski, and mobile policymakers in Washington DC like FCC commissioner Pai.

The guidance and shared networks of these people have all helped iDoc24’s goal of putting a dermatologist into everyone’s pocket. A big thanks for the shout outs and recognition the past few months from the following: Esbri

– Thanks for covering my pitch at the Sweden-US Entrepreneurial Forum in Sweden.

– Thank you for the introductions in Washington!

– Thanks, as always, for hosting all these awesome guests.

And last but not least thank you to this

for picking up on our story

5 Summer Fruits To Glow-Up Your Skin!

Tips For Your Baby’s Skin – During Summer

How To Get Freckles – Safely