Medically reviewed by The Dermatologists and written by  Dr. Alexander Borve 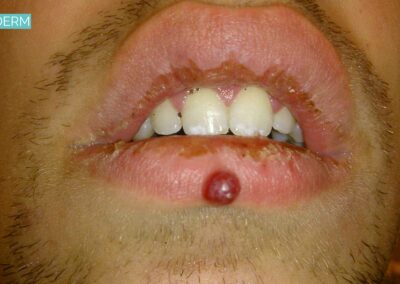 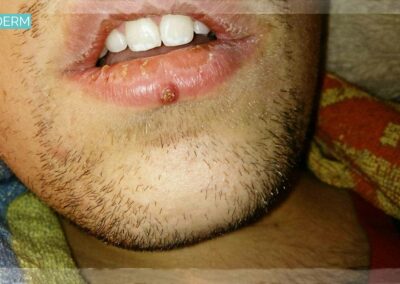 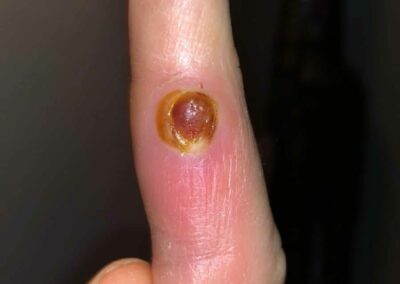 Pyogenic granulomas are abnormal growths that often occur in response to an injury or other form of trauma. Reddish bumps on the skin typically characterize these growths, varying in size from a few millimeters to several centimeters.

Pyogenic granuloma is a lesion that is commonly seen on the skin. It is an inflammatory mass and typically proliferates. While it can be benign, it can also be a sign of other conditions.

This blog post will discuss what pyogenic granuloma is, who gets it, and how to treat it. We will also explore some of the potential complications associated with this condition.

Pyogenic granuloma, also known as lobular capillary hemangioma, is a benign vascular proliferation on the skin and mucous membranes. Characterized by its bright red color, this growth may appear suddenly and multiply. In some cases, pyogenic granulomas may bleed or become painful if damaged or irritated.

In general, pyogenic granulomas develop in response to an injury or irritation to the skin, and they are prevalent among young children and pregnant women. While the exact incidence of pyogenic granuloma in the US population is unknown, available data suggest that it affects between 4-20% of all people in this country.

Additionally, there are some risk factors associated with this condition, including age (pyogenic granulomas are more commonly seen in children), gender (women during pregnancy seem to be at higher risk), weak immune status (people with compromised immune systems are more susceptible), and chronic diseases such as diabetes or HIV.

Despite these factors, however, pyogenic granulomas can occur unpredictably in anyone at any time and require prompt medical attention. Due to their widespread prevalence and potential health risks, further research on pyogenic granulomas is needed to understand better how they develop and how best to prevent and treat them.

In America, the most common factors that seem to lead to pyogenic granuloma are cuts, scrapes, and other types of injuries or trauma to the skin. These injuries can result in inflammation of local blood vessels, stimulating the rapid growth of capillaries and the thickening and hardening of connective tissue.

The subsequent lesions may appear as painful red spongy nodules on the skin. They may bleed easily in response to even minor trauma. Other risk factors include infection with hepatitis B or HIV, pregnancy, smoking tobacco products, diabetes, and immune compromise.

Ultimately, it is essential for anyone at risk of developing pyogenic granuloma to be aware of their particular risks, take appropriate precautions, and seek proper medical care if necessary.

Signs and Symptoms of Pyogenic Granuloma

The signs and symptoms of pyogenic granuloma can vary depending on the location and size of the growth. Still, some commonly observed symptoms include redness, bleeding, itching, swelling, discomfort, pain, and crusting or scabbing.

In addition to these physical symptoms, many people experience mild to moderate emotional distress due to their appearance.

Curettage, also known as scrape and cut or surgical excision, treats pyogenic granuloma. This benign skin tumor is often linked to minor injuries. This technique involves removing cancer by scraping away its surface layer with a curved metal tool called a curette. The underlying tissue can then be cut away, and any bleeding vessels are cauterized.

After removing the tumor, a sterile dressing is applied to protect the wound while it heals. Curettage is an effective treatment option for pyogenic granuloma. It typically provides excellent results with minimal scarring or tissue damage.

Electrocautery is the elective procedure to treat pyogenic granuloma or skin growths that are typically benign but can sometimes become invasive and cancerous. During electrocautery, a specially designed instrument is used to apply an electrical current to the development, destroying tissue and cauterizing any bleeding areas. This allows for the safe and effective removal of the pyogenic granuloma without risk of complication or scarring.

While electrocautery carries some level of risk, it is considered one of the most reliable methods for this type of treatment, allowing patients to return to regular activity shortly after the procedure.

Both radiosurgery and cryosurgery involve precision targeting of the lesion and minimizing damage to surrounding tissue. With radiosurgery, the procedure uses high-energy radiation beams to destroy the lesion.

However, they may not always be appropriate or feasible in some instances, so it is essential to consult with your doctor to determine which treatment option is best suited for your specific situation.

Both sclerotherapy and laser treatment involve the application of an injection or beam of energy to the affected area to destroy damaged blood vessels and reduce excessive bleeding. Although both options can effectively treat pyogenic granuloma, there are some crucial differences.

Sclerotherapy uses a solution injected directly into the affected tissue to induce clotting. This approach can be practical, as it allows for relatively precise targeting of the blood vessels involved in the inflammation process. However, sclerotherapy does carry some risks, including pain and bruising at the injection site and allergic reactions to the drug used in the procedure.

In contrast, laser treatment uses powerful lasers to target damaged blood vessels without causing any physical injury to healthy surrounding tissue. This approach offers some advantages over sclerotherapy, including a reduced risk of side effects and faster recovery time.

However, laser treatment is more costly than sclerotherapy, making it less accessible for those who may not have access to this advanced medical technology. Ultimately, which approach is right for you will depend on your individual needs and preferences and what is available in your local healthcare system.

Pyogenic granulomas are abnormal growths that often occur in response to an injury or other form of trauma. Reddish bumps on the skin typically characterize these growths, varying in size from a few millimeters to several centimeters. While the exact cause of pyogenic granulomas is not fully understood, there is evidence that they are often linked to issues with blood vessel formation or inflammation.

Treatment for these growths will depend on their size and location. Still, common approaches may include drugs that curb blood vessel formation and surgical removal. Overall, pyogenic granulomas can be a nuisance and a cosmetic concern. Still, most people can live comfortably in this condition with proper management.