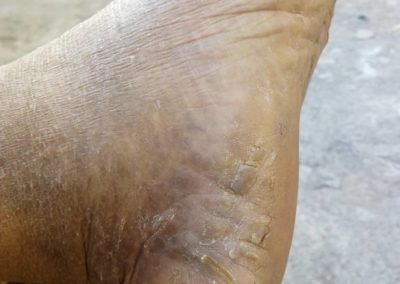 Men over 60 are twice as likely to have it. It is very rare in younger people

Mycosis fungoides, also known as Alibert-Bazin syndrome or granuloma fungoides, is a skin cancer where a form of white blood cells called T lymphocytes becomes malignant. The disease belongs to the group of cancers called lymphoma. Mycosis fungoides occurs very rarely, only about 3000 new cases annually in the US (0,3/100 000). Men make up two-thirds of patients and the condition is more common among dark-skinned people.

The skin changes are usually localized buttock region. involve the patches evolving into plaques distributed over the entire body. The later stages eventually occur in other areas, and sometimes thickenings of the skin are formed in palms and soles of the feet. In some, it can develop alternating pigmentation with dry skin, uncharacteristic eczema changes or blushing skin all over the body. An unusual variant attacks the scalp and causes hair loss. In some cases, the changes are thicker or form tumors. Enlarged lymph nodes may also occur.

The cause behind mycosis fungoides is unknown. Microbes, professional exposure and genetic mutations have been proposed as causative factors, but documentation is lacking.

The disease usually affects older men (ratio 2:1 to women). It takes an average of about five years before a diagnosis is reached. The condition can be accompanied by itching, which often improves during the summer months. A skin biopsy show typical weaving changes of the dermis under the microscope, with special immunological staining, the lymphocytes can be demonstrated.

It may also be necessary to provide strong vitamin A-like tablets and injections of the substance interferon, which affects the immune system. When tumors appear in the skin, PUVA, interferon, radiation and sometimes chemotherapy are given.

Mechlorethamine/chlormethine an alkylating agent is a topical gel for the treatment of mycosis fungoides‐type cutaneous T‐cell lymphoma.

Early diagnosis is key. In most cases, at so-called mild stages, the prognosis is very good and you live a normal long life. The presence of tumors of the skin gives a much worse prognosis, as well as conditions with widespread redness and peeling, known as erythrodermia.