Lyme Disease Rash: What Everyone Needs to Know 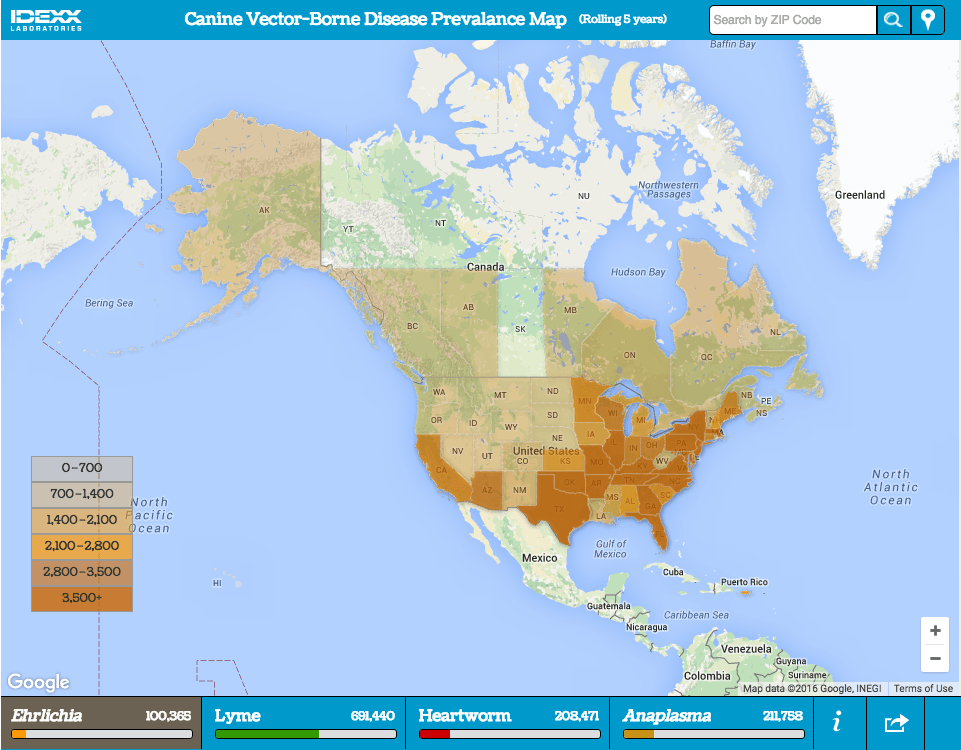 Lyme disease, and the ticks that transmit it are now found in all 50 states in America and over 80 countries around the world. The number of cases of people diagnosed with Lyme disease in the U.S. is about 300,000 and approximately 65,000 new cases of Lyme reported in Western Europe alone. But still, there are many unknowns and plenty of debate over the cause of this endemic spread and how to diagnose and treat Lyme disease.

Here’s a what scientists do and don’t know about this dangerous and growing common illness.

How does Lyme disease spread?

Lyme disease is spread by bacteria called Borrelia burgdorferi. It’s transmitted to humans via the blacklegged tick bite, in America. But now, a new tick species, the Asian long-horned tick, is making its way across the Eastern Seaboard. In other countries, the bacteria is transmitted by, the castor bean tick. The tick, itself has to have fed on the blood of a creature that carries the bacteria in order to transfer it to humans through its bite. It also needs to remain attached for 24 to 48 hours in order to transmit the Lyme-causing bacteria.

Some scientists believe that climate change is the reason these eight-legged arachnids are migrating to new territory. Global warming may be making it easier for ticks to survive and thrive further and further north.

Most scientists agree that the only way to contract Lyme disease is to be bitten by a tick that carries the bacteria. You can’t catch it from sex, from eating deer meat, or from any other type of tick. You also can’t catch it directly from your pets or other forest critters; only ticks can transmit the Lyme disease to humans.

How to protect yourself

What all this means for humans is pretty simple: The best protection against Lyme is not getting bitten. If you are bitten, removing a tick within 24 hours of its attaching dramatically slashes your chance of getting Lyme.

You can take several steps to reduce your risk of being bitten by an infected tick in the first place. Here’s how:

The most obvious sign you’ve been infected with Lyme disease is the telltale bull’s-eye rash (called erythema migrans). This rash develops in 75 percent of cases. If you know you’ve been bitten, keep a close eye out for this rash around the site of the bite. Take a photo and contact a doctor immediately. 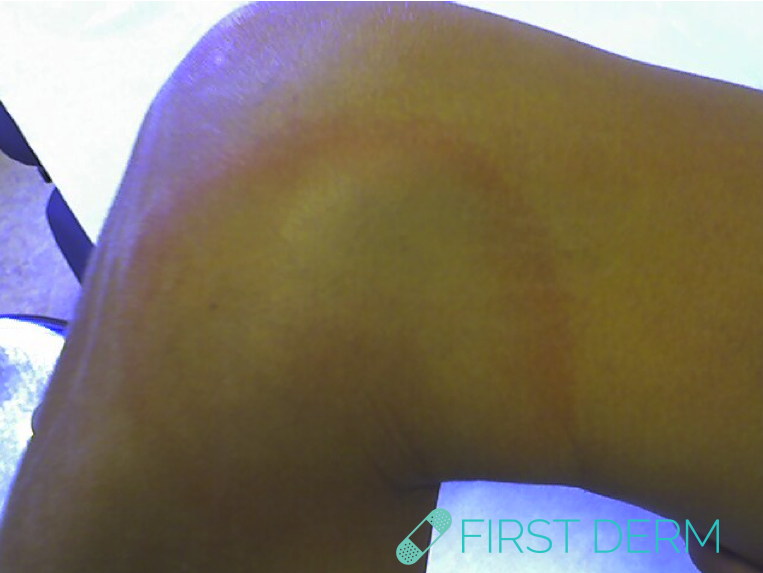 If you don’t develop a rash, or never found a tick on your body—but you have symptoms of Lyme disease (fever, chills, joint pain) after being around ticks, ask your doctor to do a blood test. The timing of the test is important. It can take weeks for the body to respond to Lyme-causing bacteria and produce the antibodies that the blood tests are measure. If you test negative in the first month after being bitten (or after symptoms emerge), you may want to get retested a few weeks later.

When to seek treatment for Lyme disease

If you test positive for Lyme, (or if you have a tick bite plus the telltale rash) your doctor will likely prescribe the antibiotic, doxycycline. Depending on how you respond, this treatment will almost always wipe out the infection. But you don’t have to wait for symptoms or a blood test to get treated for possible Lyme infection. The sooner you get treatment the better, especially if you’re elderly or have a weak immune system.

According to the CDC, a single dose of doxycycline taken within 72 hours of a tick bite can prevent the disease from emerging altogether. The drug does come with possible side effects: It can make your skin more sensitive to sunlight, and it causes nausea or vomiting in about 20 percent of people taking it.

I had a hike in the Amazon, Peru. After that I noticed a red spot on my hand. First I thought it was a mosquito bite and didn’t pay attention, but it got brighter and skin became rough like after a burn. It doesn’t hurt at all. 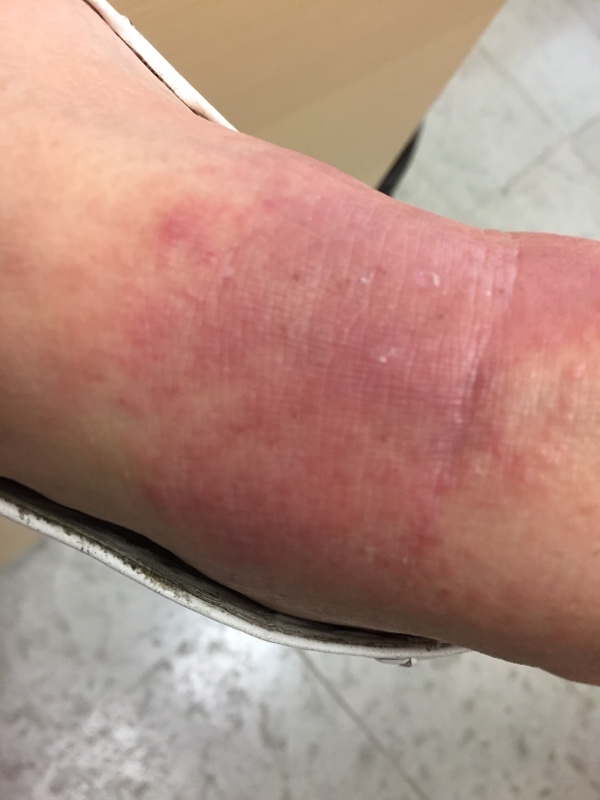 Dermatologist Answer
Thank you for sending your case. Based on the information and images of your hand, this is possibly Erythema Chronicum Migrans (ECM): ECM is a characteristic clinical feature of Lyme disease. It is a distinctive rash, which occurs in the majority of people infected with Borrelia burgdorferi from a tick bite. Lyme disease is an infection caused by borrelia, a type of bacteria called a spirochaete. Lyme disease can affect any part of the body, most commonly the skin. Lyme disease is common in Europe. Whilst Lyme disease can occur in people of all ages and gender, the peak age range affected is 45-64, followed by 24-44. The characteristic manifestation of early Lyme disease (stage 1) is erythema chronicum migrans: a circular rash at the site of the infectious tick attachment, which radiates from the bite. It can appear within 3-36 days, but typically in 7-10. It starts as a red macule or papule at the site of the tick bite after a (typically 7- to 10-day) delay. The rash is round or oval, and pink, red or purple. There is often central sparing giving a target-like appearance, and the diameter is usually larger than 5 cm. The nature of the rash and the likelihood of its presence are partly dependent on the species involved and therefore differ between continents. Untreated, this can last for some weeks and even longer. Common areas include the legs. Diagnosis can be made on the presence of erythema migrans and other symptoms, plus a history of or evidence of a tick bite. I suggest you see you GP or Dermatologist in-person for a blood test to confirm your possible diagnosis. You might need a course of antibiotics.

First Derm is in Kansas City for Sprint Techstars!

Telemedicine and the Digital Medium – The ER of the Future

Mind Skin Connection in a Nutshell