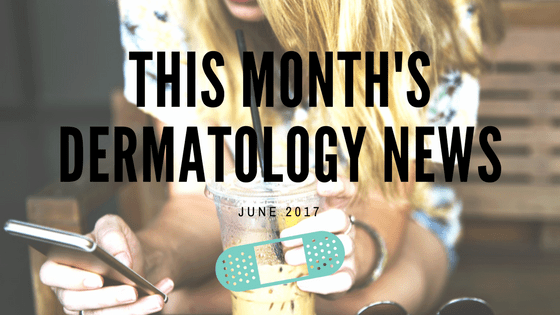 Want to keep updated about the most recent dermatology stories? Check out the juiciest dermatology news made easier for you to read so you don’t have to spend so much time browsing!

More People than Ever are Taking Way Too Much Vitamin D

Children are always told by their parents to take their vitamins as it is nutritional and beneficial for their health. However, new studies have shown that people have been overdosing on Vitamin D by taking at least 1000 IU a day than the recommended of just 600 IU. Because Vitamin D is fat-soluble, any excess amount taken will go towards the fat instead of through the water waste. Over consuming Vitamin D also raises concern in abnormal levels of calcium and allergic skin reactions.

Evidence has now shown that one of the most prevalent ingredients known for fighting bacteria may now pose a threat to consumers’ health. Triclosan can be found in many of our household items like antibacterial soaps, body washes, toothpaste, and even credit cards. The FDA claims that triclosan may trigger levels of thyroid hormone to drop, in which decreases antibiotic effectiveness and increases the risk of skin cancer.

Concerned about your skin issue? Get a response from a dermatologist today.

Since the rise in climate temperatures, doctors have been experiencing more cases of people contracting a strange meat allergy caused by tick bites. The Lone Star tick, located mostly in Mexico and the eastern United States, has been claimed to be the culprit of diseases like Alpha-Gal syndrome, which causes reactions against red meat and dairy products. Although there has been limited research about Alpha-Gal syndrome, doctors highly recommend seeking medical help if they have been experiencing similar side effects.

Every year, at least 30 million people are affected by a skin disease called atopic dermatitis, also known as eczema. Until recently, researchers have finally been able to uncover the single gene that is responsible for the skin disease. The CARD11 gene mutation causes an inability for white blood cells signaling to the immune system.

Suffering from severe eczema? Consult with a dermatologist

Chicago Blackhawks winger Marian Hossa, 38, will miss next year’s season due to a “progressive skin disorder” and the extreme side effects of the medication. Although it has been an unfortunate turn for Hossa, he has received the support from the Blackhawks and his fans to maintain his health rather than playing.

5 Summer Fruits To Glow-Up Your Skin!

Tanning Beds – Are They Safe?

How Can Allergies Affect the Skin?